Do consider coming to our next meeting. Doris makes a divine Battenberg cake.—Linda Crosby, The Book Of Life, Ch. 25.

We wanted our first post of the year to be somewhat different and whimsical, so why not tackling food history? Battenberg Cake history to be precise. We promise, it’s very light reading, with lots of pictures.

Warning: We highly recommend reading this blog post on a full stomach to avoid temptations 😛

Apparently, there are lots of stories about the legendary Battenberg cake. Whether you spell it Battenberg or Battenburg, this popular English cake is composed of alternating slabs of yellow and pink cake smeared in apricot jam and enveloped in a thin layer of marzipan. In cross section, it looks like a pretty pastel-colored checkerboard.

Where to start about the history? The most common tale is that the cake was created to celebrate the wedding of Prince Louis of Battenburg to Queen Victoria’s granddaughter, Princess Victoria, in 1884. Simple, right?

Wait. There is more!

According to one variation of this story, the four sections of the cake originally represented the four Battenburg princes—Louis himself and his brothers Alexander, Franz-Joseph, and Henry. This “myth” was shared during the BBC’s competitive baking series The Great British Bake Off. The theory has a flaw, however. The earliest recipes for the Battenburg Cake call for nine squares and not the four that are found in modern versions.

According to food historians—yes, there are indeed food historians—the earliest recipe known for Battenburg cake was published by a famous baker, Frederick Vine, in 1898 in his book Saleable Shop Goods. You can buy a modern, recent edition of this book on Amazon, by the way. 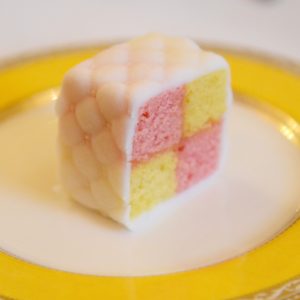 I have been completely unsuccessful in finding any contemporary accounts of this cake that confirm it was invented to honour the 1884 royal wedding.

Back to square one. No pun intended 🙂

It is very possible that the Battenberg cake went from nine to five squares when the cake started to be mass produced before World War II. Who knows!

A slice of Battenberg cake with a moist pink-and-yellow checkerboard interior and canary-colored icing sat before me at our secluded table at the Wolseley, along with still more contraband black tea. (The Book Of Life, Ch. 26)

Net-net: While we were unsuccessful at verifying the origin of this popular dessert, we had a great time finding the most daring Battenberg cakes. See the photos below!

P.S. For US readers: you can buy Battenberg cake on Amazon.com. It ships from the UK via Royal Mail at no cost. We tried (somebody has to).