I have been fortunate enough to visit London a few times, and London has always been my favourite place to go on vacation. But this time, it was like looking at this wonderful city through a different set of lenses. I went to places in London that I had never visited, or even heard of, and when I went back to the sites I had been to in the past, I saw things that I hadn’t noticed before. Our friend Wendy recounts her adventure in London, finding Diana and Matthew’s old friends and places. 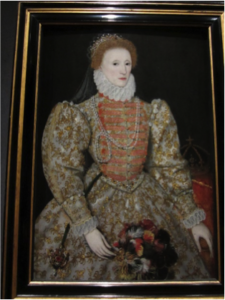 efore my trip, I printed off the walking tour of London that the ladies of The Tenth Knot created and I used that as a guide. I didn’t follow the tour as it was created but instead used it as a guide during my entire week. I didn’t make it to everything on the list, but that just means that I have something to look forward to for my next trip!

I started at the National Portrait Gallery where I got to visit some of the people in our favourite trilogy. I was looking at the portraits and wondering what Matthew would think of the likenesses and how his friends have been portrayed.

A couple of days later, I found myself visiting Gallowglass’s favourite bookstore and while I didn’t see him around in person, I did manage to visit our favourite set of books.

This is Hatchards, London’s oldest bookstore which has been in business in this spot since 1797, and I found Deborah’s books there (not in the correct order but I didn’t want to re-arrange them). 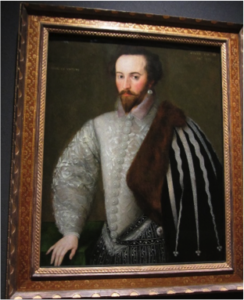 My next stop a couple of days later was to visit Diana and Matthew’s home in Shadow of Night, so I found my way to the Blackfriars. I took the tube and got off at the Blackfriars station and walked up the hill a bit until I literally stumbled on Playhouse Yard. My sense of direction is not the best, so I stopped on a corner to check my map and the Tenth Knot walking tour, looked up to see what street I was on, and low and behold I was right where I wanted to be: Playhouse Yard.

When I didn’t see any time spells, or bump into Matthew or Diana, I decided to make my way up the hill and head for St. Paul’s Cathedral. As I made my way up Blackfriars Lane, I saw the Worshipful Society of the Apothecaries and the location of the Blackfriars Priory.

Again, not bumping into any witches, vampire priests, or apothecaries, I kept on walking up Blackfriars Lane to Ludgate Hill – looking to my right, there it was … St. Paul’s Cathedral. Not the one that Diana saw in 1590, instead it is Sir Christopher Wren’s Cathedral. 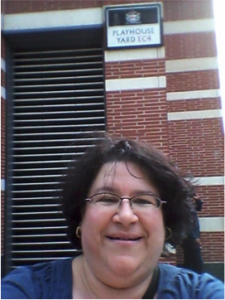 I walked around in front of the cathedral, and around the side, trying to feel what Diana felt when she was there—but clearly I don’t have any witch’s blood as I couldn’t feel anything out of the ordinary. After visiting St. Paul’s, I made my way to the Museum of London. I was mainly going to see the exhibition on the Great Fire but was surprised to see a number of different items that reminded me of Shadow of Night.

First I saw some household items that came from the same time frame as Matthew and Diana were in London – could these be the same denomination of coins that Diana used to practice her penmanship in her common place book? They are from the same time period. And the model of a church is St. Paul’s Cathedral. This is the version of the Cathedral that Matthew showed Diana when they arrived in London in Shadow of Night. Of course, with the added steeple that had not been fixed while they were in London, but it is the building that Diana would have been familiar with when she was living in the Blackfriars.

A day later, I had a couple of places that I was to visit and didn’t really think that I would find anything to remind me of The All Souls Trilogy, but, once again I was surprised—twice. First, I was touring Westminster Abbey and stumbled upon one of Matthew’s favourite authors and correspondents–Charles Darwin. It is a simple white slab of marble in the Nave giving his name, date of birth, and date of death.

After that surprising find, I next came across a tomb that I was expecting to see—Matthew’s Lizzie—Queen Elizabeth I. This is a full on life sized marble tomb showing Elizabeth in her later years—older than she was when Matthew introduced Diana to her. 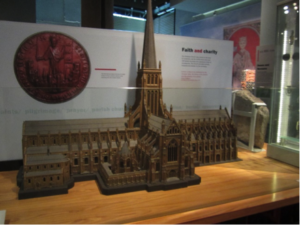 My final surprise in Westminster Abbey was in Poets’ Corner, where I found a memorial window for Christopher Marlowe. Unfortunately, you are not allowed to take pictures while in the Abbey, so I don’t have anything to show for my visit, but if you visit the website, you are able to see pictures of what I saw.

After visiting Westminster Abbey, I headed to one of my favourite museums in London, the V&A (Victoria & Albert Museum). And here, I was again surprised and amazed when I stumbled on exhibits that could have come directly from the Shadow of Night. First I came across these desks, could one of these be like the one that Phillipe gave to Diana when they left Sept Tours to head to London? 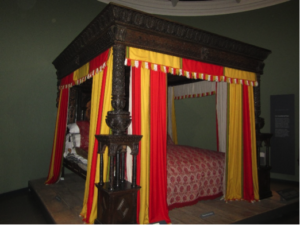 Then I came across a couple of things that reminded me of the descriptions that Deborah gave us of Diana and Matthew’s home The Hart and Crown—their bed where the twins were conceived and the wainscoting in the parlour.

One of my final sightings of Matthew and Diana in the V&A, and in fact, in London as a whole was when I turned a corner and was shocked to find myself standing in front of a display of Nicholas Hilliard’s miniatures. And not just any miniatures, I found myself looking at Matthew himself. 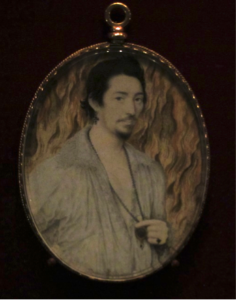 Looking back on my trip in the footsteps of Matthew and Diana, this felt like the big finale and the one that I was least expecting to see.

I know that I will be travelling back to London in the future to visit again, and I hope to also find myself in Oxford. When I do go back, I guarantee that I will be taking the All Souls Trilogy and the Tenth Knot walking tours with me. It seemed that everywhere I went in London reminded me of something else from this wonderful set of books and I can’t wait to discover even more.

Thank you Wendy for this wonderful post! We hope we can join you next time you visit London 😉