On the Footsteps of Diana & Matthew – New Haven, Part 2

In New Haven Part 2—we walk from the Beinecke Library all the way to Diana’s townhouse on Court Street, crossing through the New Haven Green, and finally ending up at Gallowglass’s condo on historic Wooster Square. We also provide a tip for a very enjoyable and free tour of New Haven, courtesy of Yale students.

I tramped up the staircase to the main level of the library. Here, glass-encased books formed the Beinecke’s spinal column, the core of knowledge and ideas around which the collection was built. Rows and rows of rare books were lined up on the shelves, bathed in light. It was a breathtaking sight, one that reminded me of my purpose as a historian: to rediscover the forgotten truths contained in those old, dusty volumes. (The Book of Life, Ch. 16) 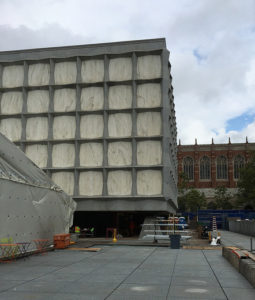 Named after two brothers, Edwin J. and Frederick W. Beinecke—both Yale graduates—the Beinecke Rare Book and Manuscript Library houses the principal rare books and literary manuscripts of Yale University. The rare book and manuscript collection of Yale University began in 1701 when ten ministers contributed a handful of books to the brand new college they founded in the Colony of Connecticut. Over the years, other book gifts followed, expanding the collection to 180,000 volumes in the iconic glass-encased central tower, plus over a million volumes in the underground book stacks.

The library is open to Yale students and faculty, as well as other scholars not affiliated to Yale. As in other similar libraries, books and manuscripts cannot be checked out and can only be used in the Reading Room.

The building, designed by Gordon Bunshaft, is made of Vermont marble and granite, and bronze and glass. Construction on the building started in 1960 and was completed in 1963. The white-and-gray-veined marble panes of the exterior are 1 and 1/4 inches thick, filtering light so that rare books can be displayed without damage.

Upon entering through the revolving glass door, visitors are greeted by the spectacular 6-floor glass tower of books. Both the entrance level and the mezzanine level serve as a showcase for rotating exhibits.

In 2015 through September 2016, the library has undergone a renovation focused on its mechanical infrastructure (plumbing, electrical, and heating and cooling system) with the goal to improve the preservation of the collections and access to greatly improved teaching spaces. The building’s marble panels, granite grid, and bronze fixtures have also been restored, and the Noguchi Sculpture Garden has been refurbished and waterproofed.

Tours: As stated on the Beinecke website, “tours are sometimes available by prior arrangement.” Contact the Beinecke via email, beinecke.access@yale.edu to request a tour.

Events: To get notifications about the Beinecke events, which are free and open to the public, you can join their email list. There are two steps to subscribe: 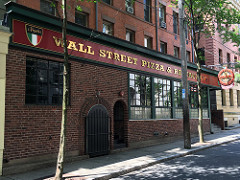 Diana’s favorite food is pizza, so it was no surprise reading about Diana dining at Wall Street Pizza in The Book Of Life. Wall Street pizza is a fairly casual and cozy dining establishment, popular for their thin pizza, cold beers, and student-friendly prices. The restaurant is literally one block away from the Beinecke Library, and therefore very convenient for Diana and Lucy Meriweather.

They’re open for breakfast, lunch, and dinner, and closed on Sunday. Check their website for opening hours.

Gallowglass insisted we pick up something to eat, so we stopped at the pizza place on Wall Street. I waved to a fellow historian who was sitting in one of the scarred booths with stacks of index cards and an enormous soft drink, but she was so absorbed in her work she barely acknowledged me. (The Book of Life, Ch. 17)

We cut across the green and through the gap between the courthouse and City Hall. On Court Street we crossed the railroad tracks and headed toward my house. (The Book of Life, Ch. 17)

The gap described in Chapter 17 is actually a pedestrian-only area marked on the maps of New Haven as the Vision Trail. It is also a shortcut that connects the New Haven Green with Court Street, the street where Diana’s townhouse is located.

The Green has a somewhat spooky history, as it was used as the main burial grounds for the residents of New Haven. The practice was abolished in 1821 and many of the tombstones—were moved to the Grove Street Cemetery. However, the remains of the dead still remain below the soil of the Green. When strong winds from Hurricane Sandy knocked over an oak tree in October 2012, a human skeleton likely dating back to colonial times emerged with the tree roots and soil. May be Matthew is just trying to protect Miriam from any spooky encounters 🙂

Take care of Miriam. Don’t let her walk across New Haven Green at night, even if she is a vampire. (The Book of Life, Ch. 23)

I looked down the pedestrians-only length of Court Street, a tree-lined, residential enclave in the heart of the city. As usual, it was deserted, except for a black cat and some potted plants. (The Book of Life, Ch. 17) 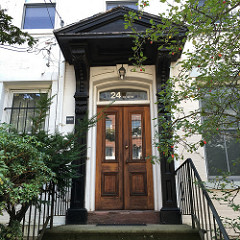 A townhouse on Court Street

Diana’s house in new Haven is in the peaceful, pedestrian-only stretch of Court Street, in the Wooster Square Historic District, east of downtown New Haven. The trees, potted plants, and even the small vegetable gardens give a private feel to the colorful narrow houses. Individual door colors and other small details are the only accents that make each house unique. The small Court Street townhouses—all 20 feet wide and 30 feet deep—are quite resilient, having survived economic crisis, real estate market crashes, and urban developments.

Walk to the intersection between Court Street and Olive. That’s where the reunion with Jack Blackfriars takes place.

When Matthew returned home to the brightly painted red door with the white trim and the black pediment, it opened wide. (The Book of Life, Ch. 21)

“Thanks, but I’m around the corner. At Gallowglass’s condo,” Miriam replied. “What condo?” Matthew frowned. “The one he bought on Wooster Square. Some converted church. It’s very nice—a bit too Danish in decor, but far preferable to Marcus’s dark-and-gloomy period.” (The Book of Life, Ch. 15) 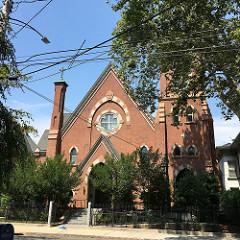 Gallowglass’s condo is located in the apartment complex called the Gables at Wooster Square. The Gables apartment complex is indeed a converted Catholic church. Over the years, the Archdioceses of Hartford merged and closed several churches in New Haven, and St. Casimir’s was one of the casualties.

Wooster Square takes its name from Major-General David Wooster, who maintained a warehouse on Wooster Street prior to the American Revolution. General Wooster died in  1777 in Fairfield, CT while leading his troops against the British. Hmm … Wondering if he knew Matthew and Marcus.

In spite of the late hour, Gallowglass’s house was not the only one in the neighborhood that was still illuminated. New Haven was a college town, after all. Most of Wooster Square’s night owls sought a strange companionship, working in full view with curtains and blinds open. What distinguished the vampire’s house was that the drapes were tightly closed and only cracks of golden light around the edges of the windows betrayed the fact that someone was still awake. Inside the house pools of lamplight cast a warm glow over a few personal belongings. Otherwise it was sparsely decorated with Danish Modern furniture made from blond wood accented with occasional antiques and splashes of bold color. (The Book of Life, Ch. 20)

I hope you brought your checkbook, Clairmont. The Yale Center for Genome Analysis and the DNA Analysis Facility both charge steep fees, but they’re fast and accurate. (The Book of Life, Ch. 14)

Matthew headed north and west and out of the city with Diana beside him. He drove uncharacteristically fast, and in less than fifteen minutes they were on a quiet lane tucked into the shadow of the peaks known locally as the Sleeping Giant. Matthew pulled in to an otherwise dark driveway and shut off the car’s ignition. (The Book of Life, Ch. 22) 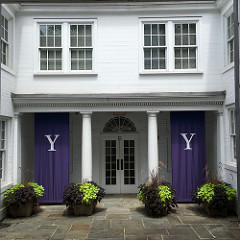 Located across the street from the New Haven Green, the Visitor Center offers free tours led by Yale College undergraduates. The tour includes a visit of one of the college courtyards, and it’s absolutely worth it!