We are heading west from the Blackfriars and outside the old Roman Walls to visit two very resilient buildings: A magnificent half-timbered building, which served as the model for the Hart and Crown at the Blackfriars, and then Middle Temple, one of the Inns of Court. Both buildings were spared from the Great Fire of London and two World Wars.

The Staple Inn—Model for the Hart and Crown 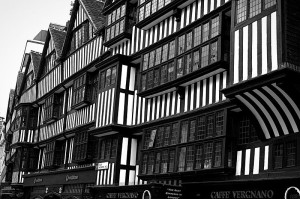 This historic black and white half-timbered structure overlooking High Holborn (map) is one of London’s few surviving Tudor buildings. The Staples Inn dates from 1586 and it is Deborah’s model for the Hart and Crown at the Blackfriars. The inn is a “listed building,” meaning that it has been placed on the Statutory List of Buildings of Special Architectural or Historic Interest. A “listed building” is nearly untouchable and may not be altered (or demolished) without special permission from the local government agency.

The building was once the wool staple, where wool was weighed and taxed. It is also the last surviving Inn of Chancery. The Inns of Chancery were legal institutions, as well as buildings, used as offices for the clerks of chancery. The Inns of Chancery were attached to the Inns of Court, and the Staple Inn was attached to the Gray’s Inn, one of the four Inns of Court. Nowadays, the building houses a number of storefronts and a café, while the great hall is used for meetings of the Institute and Faculty of Actuaries. Just like in Matthew Roydon’s time, today, there are shops on the ground floor, residents above, and a courtyard in the back. It is not difficult to imagine the Hart and Crown in Elizabethan London with the nearby Fields’ printing shop, Vallin’s silver shop, apothecary, play house, and the Cardinal’s Hat.

[…] Above my head a wooden sign swung on its metal rod. It was decorated with a white deer, its delicate antlers circled with a golden band. 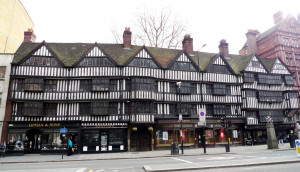 The Staple Inn – model for the Hart & Crown

“Here we are,” Matthew said. “The Hart and Crown.”

The building was half-timbered, like most on the street. A vaulted passage spanned two arrays of windows. A shoemaker was busy at work on one side of the arch, while the woman opposite kept track of several children, customers, and a large account book. She gave Matthew a brisk nod.

[…] The passage emptied out into the building’s interior courtyard—a luxury in a city as densely packed as London. The courtyard boasted another rare amenity: a well that provided clean water to the residents of the complex. Someone had taken advantage of the courtyard’s southern exposure by tearing up the old paving stones to plant a garden, and now its neat, empty beds patiently awaited spring. Chapter 15, SON

An air raid in 1944 destroyed the courtyard and the old hall, which were eventually restored. The great hall is not open to the public, but you can still have a look around the courtyard, and why not, enjoy a respite at the coffee shop, pretending to be at the Cardinal’s Hat. 🙂

Middle Temple & The Inns of Court

I heard he was at the Middle Temple Hall with Christopher Marlowe last night. Watching a play, by all accounts. Catherine passed the box of comfits she’d brought to Goody Alsop. Chapter 23, SON 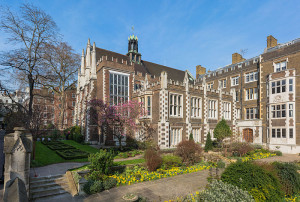 Middle Temple (map) is only a 15-minute walk (0.6 miles) from the Staple Inn, and it is one of the four remaining Inns of Court. The others being Gray’s Inn, Lincoln’s Inn and Inner Temple. The Inns of Court in London were the locations were lawyers and judges used to train. In Matthew Roydon’s time, the students at the four Inns often organized and acted in plays during winter festivals. This tradition is still carried on today when Inn members organize and participate in Christmas performances. Middle Temple Hall (left of the Agas map) was built between 1562 and 1573 and had the good fortune of surviving the Great Fire of London and both World Wars.

The Hall at Middle Temple is considered one of the finest examples of Elizabethan halls, and it is still the center of life for the Inn today as students meet there daily for lunch. It accommodates up to 500 people. It is also used for formal dinners, weddings, and meetings, and it is possible to book tours and even lunch or tea to experience the building in its full glory.