On the Footsteps of Diana & Matthew – Piccadilly, St. James and Surrounding Areas

In our last post of London, we’re indulging with Battenberg cake and good tea, plus books, and wine! Bordering Mayfair, you’ll find two locations on Piccadilly named in The Book of Life: the Wolseley and Hatchards. They are both a “must-see” in London, and they’re relatively close to Clairmont House. Leaving Clairmont House at your back, start with Hatchards, and then proceed to the Wolseley, before heading in the direction of St. James’s Palace to visit Pickering Place (Marcus’s house), and wine nirvana, Berry Brothers & Rudd. If you want to continue to the Royal Society, you will only need to walk for another 10 minutes. 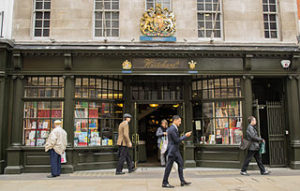 “What about a map?” Gallowglass suggested. “Matthew must have a map or two in his library upstairs. If not, I could go around to Hatchards and see what they’ve got.” (TBOL, Chapter 26)

Opened in 1797 on Piccadilly by John Hatchard, Hatchards is London’s oldest bookshop and is considered a London institution, just like the adjacent tea house, Fortnum and Mason. In 2014, Hatchards opened a new store in St. Pancras Station, again right next door to Fortnum and Mason.

A slice of Battenberg cake with a moist pink-and-yellow checkerboard interior and canary-colored icing sat before me at our secluded table at the Wolseley, along with still more contraband black tea. (TBOL, Chapter 26) 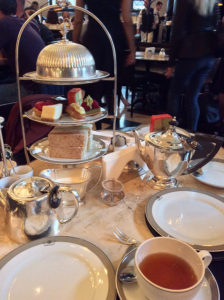 Right at the border of Mayfair, on Piccadilly and two blocks away from Hatchards, The Wolseley is considered one of the best locations in London for afternoon tea. But this building was not always a posh restaurant. In 1921, this was a car show room for The Wolseley Car Company. Unfortunately, the cars did not sell and by 1926, the company was bankrupt. Barclays Bank acquired the building a year later.

In 2003, Chris Corbin and Jeremy King purchased the site and The Wolseley opened in November 2003.

Being a very popular place, reservations are a must, and they can be easily made online. Their afternoon tea is highly recommended. And the best part: a piece of Battenberg cake is normally included with your scones and sandwitches!

“My connections?” Hamish buried his head in his hands and groaned. “This could take weeks. I might as well live at the Wolseley, given all the coffees I’m going to have with people.” (TBOL, Chapter 26) 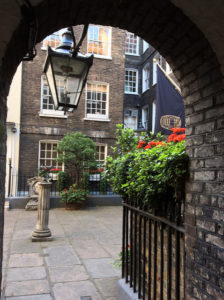 “Marcus’s house over by St. James’s Palace. It was a gift from Matthew, I understand. He lived there before he built Clairmont House,” Phoebe said. Her lips pursed.  (TBOL, Chapter 24)

This hidden courtyard is not only the smallest square in Britain, it is also the place where the last duel was fought, and home to the Texan Republic’s embassy (until it joined the United States in 1845).

The passageway to the left of Berry Brothers & Rudd leads into the courtyard, complete with its original gaslights, the old Texan embassy plaque, and Georgian architecture. 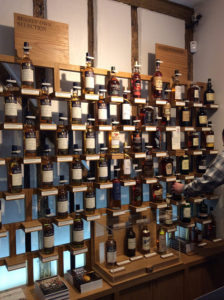 In 1698, Widow Bourne—only her last name is known—established a grocer, opposite St. James’s Palace, which in that year became the official principal residence of the king.

The Berry family entered the scene in the 1800s, shifting the business towards wine and spirits. As the Chartist riots spread through England, George Berry signed up as a special constable, together with his friend, the future Napoleon III. In exile in London, Napoleon used the merchant’s cellars to hold secret meetings, hence the name of Napoleon cellar. The Rudd family joined the business in the 20th century, and in 1998, Berry Bros. & Rudd celebrated 300 years in business.

The beautiful historic cellars below the shop and Pickering Place were gradually renovated to host private wine events and the prestigious wine school. Berry Bros. & Rudd continues to supply the British Royal Family, as they have done since the reign of King George III.

Hamish showed Matthew the bottle of wine, and the vampire made an appreciative sound. “That will do nicely.”

“I should think so. The gentlemen at Berry Brothers and Rudd assured me it was excellent.” Hamish poured the wine and pulled the stopper from his decanter. Glasses in hand, the two men sat in companionable silence. (ADOW, Chapter 9)

Virtual tour inside the store: https://goo.gl/maps/9suvS3DW9Ep 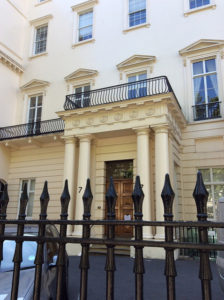 I gripped the edge of the card, careful not to touch his fingers in the process. Oxford University’s familiar logo, with the three crowns and open book, was perched next to Clairmont’s name, followed by a string of initials indicating he had already been made a member of the Royal Society. (ADOW, Chapter 2)

The society’s motto, Nullius in verba, is Latin for “Take nobody’s word for it,” the perfect motto for an organization whose roles include: promoting science, recognizing and supporting excellence in science, as well as providing scientific advice for policy, fostering global cooperation, education and public engagement. Fellows—you won’t find Matthew Clairmont on their website— are elected for life among the scientists and engineers from the United Kingdom and the Commonwealth, who have made a substantial contribution to the fields of mathematics, engineering, and medical science. The Royal Society was founded in 1660 and was was granted a royal charter by King Charles II.

The Royal Society’s reading room was flooded with summer sunshine. It raked through the tall, multipaned windows and spilled across the generous reading surfaces.  (TBOL, Chapter 41) 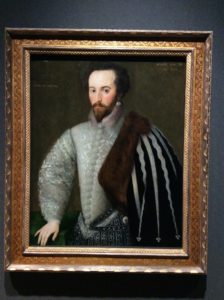 Bonus points for those who can brave another 15-minute walk or a few bus stops: Very close to the Royal Society is the National Portrait Gallery (not to be confused with the National Gallery), where you can find many Shadow of Night friends, including Mary Sidney, Sir Walter Raleigh, and Queen Elizabeth I. Admission is free.

“She has seen the portrait of Sir Walter that you painted for me last year,” Matthew said smoothly, covering up my too-effusive greeting. “One of his best pieces, I agree,” Henry said, looking over the artist’s shoulder. “This seems destined to rival it, though. What an excellent likeness of Mary, Hilliard. You’ve captured the intensity of her gaze.” Hilliard looked pleased. (SON, Chapter 16)