On the Footsteps of Diana & Matthew – New Haven, Part 1

In this new post—part one of a two-part series—we’re exploring Diana’s New Haven as the backdrop for The Book of Life. The posts follow the chapters, starting with Chapter 15. Even though downtown New Haven is fairly compact and the locations are walking distance, at least two days are recommended to walk the same itinerary. Three days become necessary if you want to visit museums, tour the Beinecke Library, and attend concerts.

Shopping and Strolling in New Haven 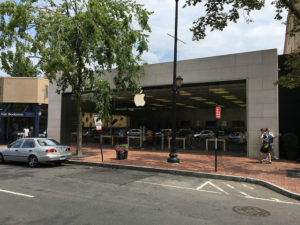 We’d spent most of the weekend stocking the house with essentials like any normal New Haven couple: wine from the store on Whitney Avenue for Matthew, groceries for me, and enough electronics to outfit a computer lab. Matthew was horrified that I owned only a laptop. We left the computer store on Broadway with two of everything—one for him and one for me. Afterward we strolled the paths of the residential colleges while the carillon played in Harkness Tower. College and town were just beginning to swell with returning students who shouted greetings across the quad and shared complaints about reading lists and class schedules. (The Book of Life, Ch. 15)

All the shopping locations described in Chapter 15 are clustered in one area, not far from the Harkness Tower. And Deb has managed to describe witch-vampire shopping—succinctly in one paragraph!

Note: The shopping locations have not been confirmed by the author, so they represent mere speculations or educated guesses.

Built in the Gothic style as part of the Memorial Quadrangle, Harkness Tower was actually constructed in 1917 and 1921. The Tower was designed by James Gamble Rogers, who also designed many other Yale Gothic buildings. The structure is named after Charles William Harkness (Yale class of 1883), brother of Yale’s largest benefactor, Edward Harkness. The tower is 216 feet tall (66 m).

Members of a student-run group called the Yale Guild of Carillonneurs play the 54-bell Yale Memorial Carillon, twice per day during the school year (at 12:30 p.m. and at 5:30 p.m.), and only in the evening, during the summer. The Yale Carillonneurs host free summer concerts, where they invite carillonneurs from all over the world to join and play at Harkness Tower.

Trivia: Deborah Harkness is distantly related to the Yale Harknesses, as she revealed on a Facebook post on October 2014 (All Souls Discussion Group).

He [Matthew] was at Human Resources getting his identification badge while I waited for him in the rarefied atmosphere of the nearby New Haven Lawn Club. The hushed confines of the main building dampened the distinctive plonk of tennis balls and the screaming children enjoying the pool during the last week of summer vacation. Three brides-to-be and their mothers had been escorted through the room where I was sitting to view the facilities they would enjoy should they be married here. This might be New Haven, but it was not my New Haven. (The Book of Life, Ch. 15)

Located in the downtown area of New Haven across the street from Klein Biology Tower, the New Haven Lawn Club is a private club, which was founded in the late 1800s. Marcus Whitmore is one of the founding members 😉

A fire destroyed the Clubhouse in 1929, and a much larger facility was designed by New Haven architect Douglas William Orr and opened 1931.

To become a member of the Lawn Club, prospective members must obtain three recommendation letters from current members of the Club. And if you don’t know any members or are new to the area, the administrators are happy to introduce you to members of the Club. 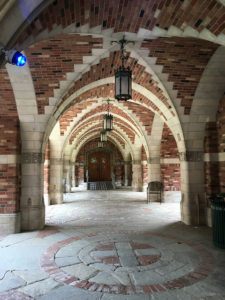 His attention wandered over the table, taking in the untouched pot of tea, my blank yellow legal pad, and the unopened copy of the latest American Historical Review that we’d rescued from my overstuffed department mailbox on our way to Science Hill. (The Book of Life, Ch. 15)

Diana’s department mailbox is located at the Department of History, which is housed at Yale Hall of Graduate Studies, very close to Harkness Tower and the Beinecke Library.

While history has been taught at Yale since since the 1760s, the Department of History has existed since 1919, when Yale divided its faculty into academic departments. Yale awarded its first History Ph.D. in 1882 to Clarence Winthrop Bowen for a dissertation entitled “The Boundaries of Connecticut,” which was published in the same year. History became the largest major in the 1950s and has been a popular major ever since.

About 150 History graduate students currently are in residence, and the Department accepts between 20 and 25 new students into its graduate programs each year. 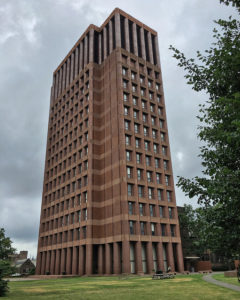 We crossed Whitney Avenue by the garden filled with dinosaur statuary, cut behind the Peabody, and approached the tall tower where Chris’s labs were located. My steps slowed. Matthew looked up, and up some more. “No. Please not there. It’s worse than the Beinecke.” His eyes were glued to the unappealing outlines of Kline Biology Tower, or KBT as it was known on campus. He’d likened the Beinecke, with its white marble walls carved into square hollows, to a giant ice-cube tray.

“It reminds me of—” “Your lab in Oxford was no great beauty either, as I recall,” I said, cutting him off before he could give me another vivid analogy that would stay with me forever. (The Book of Life, Ch. 15)

Kline Biology Tower, or KBT, is a skyscraper and the fourth-tallest building in New Haven, Connecticut. Home to the Yale University Department of Biology, the building was designed by Philip Johnson, who also designed the nearby Kline Geology and Chemistry Laboratories.

I just can’t believe there’s a vampire at Yale.”

“You’ve obviously never been to the astronomy department,” Game Boy said. “There are four vampires on the faculty there. (The Book of Life, Ch. 15)

The Astronomy Dept. (Steinbach Hall) is near KBT in case you want to look for the vampire faculty.