On the Footsteps of Diana & Matthew – The Blackfriars & Baynard’s Castle

Proceeding south from St. Paul’s Cathedral, the Blackfriars is just a few blocks away, whether you’re consulting the Agas Map or Google Maps. Since the Blackfriars and Baynard’s Castle are featured in Shadow of Night, and The Book of Life, finding them on the two maps, and comparing the maps is a lot of fun. 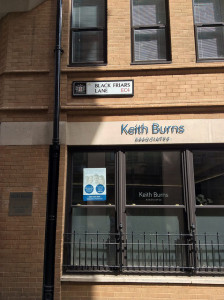 Leaving St. Paul’s Cathedral behind, take Ludgate Hill heading west. Just outside the Blackfriars on Ludgate Hill, is the site of the Belle Savage Inn, even though the location is not marked. This is the famous inn where Matthew treats Diana to dinner and “Marocco’s performance.” Chapter 38, SON.

Make a left on Pilgrim Street, and then another left on Ludgate Broadway. At the intersection of Ludgate Broadway, Carter Lane, and Blackfriars Lane, you’ll find the plaque marking the Priory of the Blackfriars. The Dominican priory was closed in 1538 during Henry’s dissolution of monasteries, and today is the site of many office buildings and flats. By taking Carter Lane and making a right on Church Entry, you can still find traces of the churchyard of St. Ann Blackfriars, which was built on part of the site of the monastery. The church of St. Ann was eventually destroyed in the Great Fire in 1666.

At the foot of a narrow thoroughfare called Church Entry, I stopped to get my bearings. Chapter 25, TBOL. 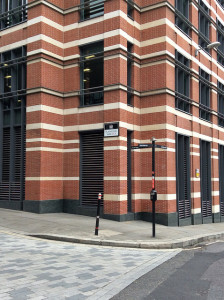 “Your house, madame,” Leonard said, sounding like a tour guide and waving at the red-and-cream brick office building that loomed above us. Chapter 25, TBOL.

“Blackfriars Lane,” I said reading the sign that zipped past. I jiggled the door handle. “Let me out.” […] I stepped out onto the stone sidewalk. It was firmer footing than the usual mud and muck of Water Lane, as we’d called the street in the past. Chapter 25, TBOL.

Above my head a wooden sign swung on its metal rod. It was decorated with a white deer, its delicate antlers circled with a golden band. “Here we are,” Matthew said. “The Hart and Crown.” Chapter 15, SON.

Playhouse Yard is also the site in The Book of Life where Diana, Sarah, and Gallowglass meet Linda Crosby in modern London.

Right around the corner from Playhouse Yard, on Blackfriars Lane, you’ll find the entrance and beautiful courtyard of Apothecary Hall, the headquarters of London’s apothecaries, which was rebuilt after the Great Fire. While this location is mentioned in The Book of Life, in Shadow of Night, Master Chandler tells Diana that there are excellent apothecaries in the Blackfriars. Chapter 17, SON.

Note: The model building for the Hart & Crown is a Tudor building called the Staple Inn, located in a different area, and that you can briefly see in this video. This location will be covered in the upcoming Part 9. Address: Staple Inn, High Holborn, London WC1V 7QJ

“And that is Baynard’s Castle.” It was the largest building I had seen yet except for the Tower, St. Paul’s, and the distant prospect of Westminster Abbey. Three crenellated towers faced the river, linked by walls that were easily twice the height of any nearby houses. Chapter 16, SON. 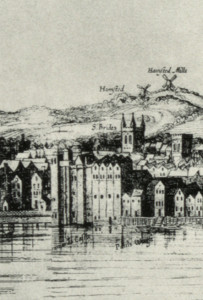 Originally built by Ralph Baynard as a Norman fortification, Baynard’s Castle was eventually demolished by King John in 1213 and rebuilt southeast from the original castle as a medieval palace. The medieval palace is yet another victim of the Great Fire of London. Fast forward to the end of  the 15th century, and Henry VIII gave the palace to Catherine of Aragon as a wedding present. However, after Henry’s death the palace went to Catherine Parr’s brother-in-law, William Herbert, Earl of Pembroke. Sound familiar? Henry Herbert is William Herbert’s son and husband to Mary Sidney.

Though our rooms were large and comfortably furnished, Baynard’s Castle was the home of aristocracy, and it showed. Chapter 16, SON.

Sadly, Baynard’s Castle was destroyed and never rebuilt after the Great Fire of London. Fragments of the building survived however, and were found in 1972, during the construction of the modern road, and office building, called Baynard House, currently occupied by a British Telecom office. The castle is also commemorated in Castle Baynard Street and the Castle Baynard ward of the City of London.