On the Footsteps of Diana & Matthew – St. James Garlickhythe & the Royal Exchange

Garlic Hill and St. James Garlickhythe are two landmark locations forever associated with the formidable Garlickhythe gathering. Including these locations in our journey was “a must.” We have retraced the route Diana might have walked from the Hart and Crown to Goody Alsop’s home. In one instance, we know that Diana took a boat that waited at the bottom of Garlic Hill to go back to the Blackfriars (Chapter 23, SON). The Royal Exchange is featured toward the end of Shadow of Night, but since it’s walking distance from St. James, we decided to include it in the same post.

We are to go to her house near St. James’s Church on Garlic Hill.” When I didn’t react, Matthew scowled and continued. “It’s on the other side of town, within spitting distance of Andrew Hubbard’s den.” Chapter 19, SON 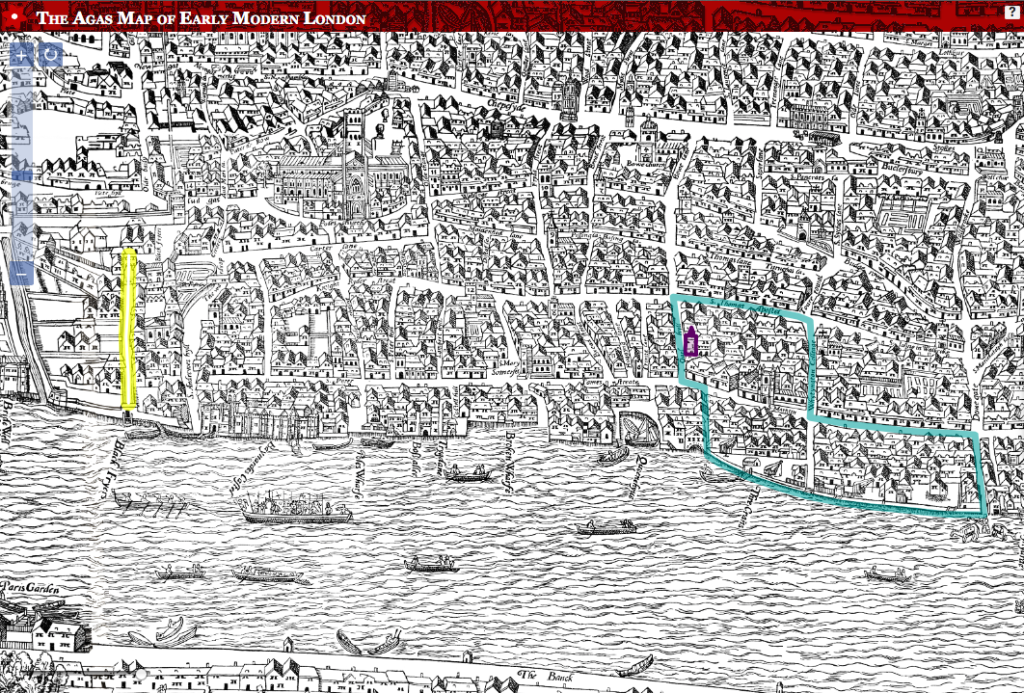 Matthew may have exaggerated the distance, nervous of Father Hubbard’s proximity. St. James Garlickhythe is only half a mile (a 10-minute walk) from the Blackfriars if you want to retrace the route Diana took from the Hart and Crown to the Garlickhythe gathering. The screenshot of the Agas Map shows Water Lane in yellow, St. James in purple, and the Vintry ward perimeter in light blue, so you can visualize Diana’s route—probably via Thames Street in Elizabethan London. In modern London, you’ll start from Blackfriars Lane and take Castle Baynard Street, which then turns into Thames Street.

Annie led us into an alley across from the church. Though dark, it was as neat as a pin.

“There, Master Roydon,” the girl said. She directed Matthew’s attention to the sign with a windmill on it before darting ahead with Pierre to alert the household to our arrival. Chapter 19, SON 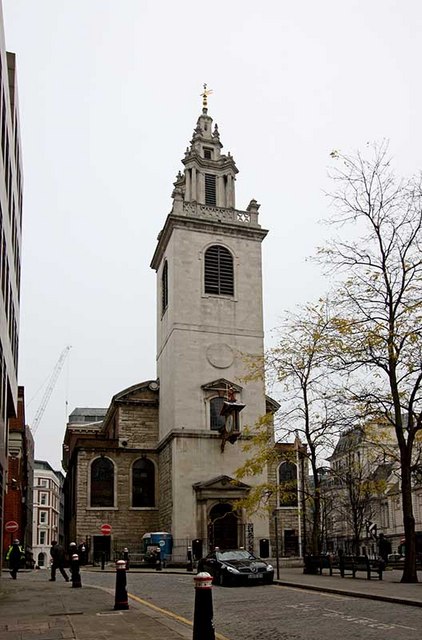 Ever wonder where the word ‘Garlickhythe’ comes from? ‘Hythe’ is a Saxon word for a landing place, port, or haven. ‘Garlickythe’ refers to the landing place near which garlic was sold in medieval times. The same ships carrying garlic also transported wine, so not surprisingly the nearby church of St. James Garlickhythe has a long association with wine merchants. It is also part of the Ward of Vintry (Marjorie’s husband is a vintner).

At the bottom of Garlic Hill, within easy reach from St. Paul’s Cathedral, the church is dedicated to the apostle St. James. St. James Garlickhythe was built around the 12th century. We do not know for certain, but the first reference to the church was found in a 12th-century will. St. James however has been rebuilt and restored a number of times, so it’s no surprise it looks more ‘modern.’

We can’t help but wonder if the Garlickhythe gathering had a hand in keeping the church standing to these days. Below are some noteworthy—perhaps witchy facts:

As the Vintners’ Livery Company uses the Church regularly, it has contributed greatly to its restoration and maintenance. Who knows. Some of the members may be descendants from the “extended Garlickhythe gathering” 😉 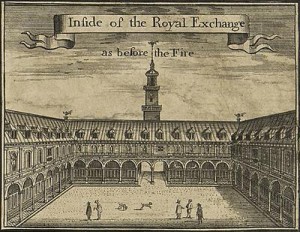 “The Royal Exchange.” I turned to him in excitement. “At night! You remembered.”

“A gentleman never forgets,” he murmured with a low bow. “I’m not sure if any shops are still open, but the lamps will be lit. Will you join me in a promenade across the courtyard?” Chapter 39, SON

The Royal Exchange officially opened on January 23, 1571 by Queen Elizabeth I who awarded the building its royal title and a license to sell alcohol.

It has twice been destroyed by fire—first in 1666 during the Great Fire of London, and then in 1836—and later suffered severe damage during the Blitz in 1941, which left the building in disuse for several years. The Royal Exchange briefly returned to its trading function in the 1980s, and was finally turned into a luxury shopping and dining destination in 2001. Today you can even shop at the Montblanc store. May be that’s where Matthew gets its pens and pencil supply. 🙂 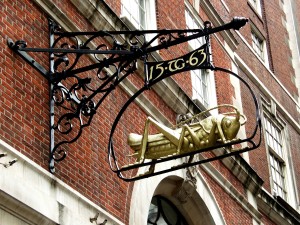 The gilded copper grasshopper weathervane, Gresham’s emblem, continues to pay homage to its founder, and may be the only feature that Diana and Matthew would recognize from the building they saw in Shadow of Night.

We entered through the wide arches next to the bell tower topped with a golden grasshopper. Inside, I turned around slowly to get the full experience of the four-storied building with its hundred shops selling everything from suits of armor to shoehorns. Statues of English monarchs looked down on the customers and merchants, and a further plague of grasshoppers ornamented the peak of each dormer window. SON, Chapter 39