On the Footsteps of Diana & Matthew – Mayfair

We left the City and Elizabethan London of Shadow of Night to explore posh Mayfair in The Book of Life. In this post, we visit five locations clustered in the same area to make it easier to plan a trip. We start with Clairmont House and end the tour at Sotheby’s, after a stop (for a drink) at The Coach and Horses in honor of Gallowglass. The next post will explore a few locations near Mayfair, in the Piccadilly area, and St. James’s Palace.

This cannot be my house, Leonard.” The palatial brick mansion’s expansive five-windowed frontage and towering four stories in one of London’s toniest neighborhoods made it inconceivable. Chapter 24, TBOL 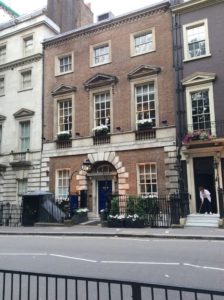 Hamish describes Clairmont House as rather grand, Diana thinks that it is a glorious bit of history to call home, Phoebe is stunned silent, muttering words like museum and priceless (Ch. 24), while Sarah—naturally— calls it an overdecorated dust-bunny sanctuary (Ch. 25).

The Clermont Club at 44 Berkeley Square is the inspiration for Clairmont House in Mayfair, which is one of the most exclusive and luxurious London neighborhoods. The building was completed in 1745 and is now a private gaming club. Only club members have access, and as stated on the club website, membership is strictly by invitation only or recommendation.

“Don’t worry, Diana. Clairmont House isn’t half so grand inside as it is out. There is the staircase, of course. And some of the plasterwork is ornate,” Hamish said as he opened the car door. “Come to think of it, the whole house is rather grand.” Chapter 24, TBOL

Trivia: in The Book of Life, Clairmont House is on a little street near the Connaught, and not on a square. 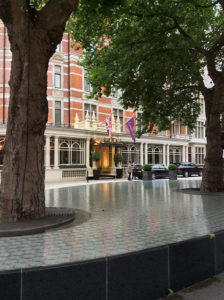 The Connaught, the hotel near Claimont House in The Book of Life, is a 5-star hotel that dates back to the early 1800s. The relatively modern look is the result of a more recent £70 million restoration and refurbishment. Noteworthy is the hotel’s two-star Michelin restaurant, and the limestone wine cellar beneath the kitchens that houses 6,000 vintage wines.

We remained locked alone in the house for three days, twined together, talking little, never separated for more than the few moments when Matthew went downstairs to make me something to eat or to accept a meal dropped off by the Connaught’s staff. The hotel had apparently worked out a food-for-wine scheme with Matthew. Several cases of 1961 Château Latour left the house in exchange for exquisite morsels of food, such as hard-boiled quail eggs in a nest of seaweed and delicate ravioli filled with tender cèpes that the chef assured Matthew had been flown in from France only that morning. Chapter 30, TBOL 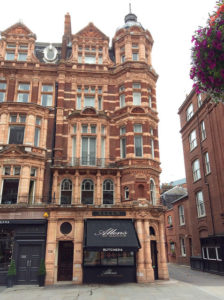 Old location of Allens of Mayfair

“Diana’s neighbors are wealthy and paranoid. There hasn’t been any activity at the house for nearly a year. Suddenly there are people around at all hours and Allens of Mayfair is making daily deliveries.” Chapter 26, TBOL

Allens of Mayfair (now an online business) is quite literally a piece of history and a London institution. Allens was originally opened in South Audley Street in 1830, and moved to its final location on Mount Street in 1880. In October 2015, Allens was forced to close, likely due to soaring rents. Allens however continues with its popular Butchery Classes and its online business, providing high quality meat to many of London’s finest establishments including the Connaught, The Dorchester, and The Savoy.

Even though we can no longer visit the store (we were lucky to snap some pictures last summer), we can still browse Allens’ website. Check out their online recipes! allensofmayfair.co.uk/recipes-and-tips. 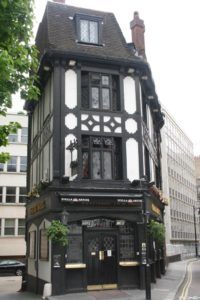 The Coach and Horses

Gallowglass lit a cigarette and ambled along the sidewalk, emitting more smoke than a Mississippi steamboat. We lost sight of him outside the Coach and Horses, where Gallowglass indicated through a series of silent gestures that he was going in for a drink.

The Coach and Horses was built in 1770, and it is one of the oldest pubs in Mayfair. The timbered walls and the exterior stain glass windows make it hard to miss even though the building is relatively small compared to the neighborhood buildings.

Note that The Coach and Horses is a common name for British pubs. In London alone there are still over fifty Coach and Horses pubs, so make sure to look up this pub using the street address. 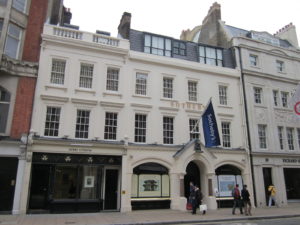 “The de Clermonts are fortunate to have such a long and happy relationship with Sotheby’s. Matthew’s tower would have collapsed under the weight of his books if not for meeting Samuel Baker.”

No wonder Phoebe’s jaw dropped. Matthew knew the founder of Sotheby’s! The famous auction house was founded by Samuel Baker in 1744, initially occupying a location on the Strand, and then moving to Mayfair in 1917. Sotheby’s is known for its high-profile auctions involving diverse art, from Old Master Paintings to Impressionist and Modern Art, as well as Decorative Art. Sotheby’s Cafe, located within the auction house, serves breakfast, lunch, and a very good afternoon tea.