On the Footsteps of Diana & Matthew – Part 7: St. Paul’s Cathedral

Did you know that there’s map, which is as close as it gets to “Google Map for Elizabethan London?” The Agas Map is referenced in the All Souls Real-Time Reading Companion and it’s an interactive map of early modern London hosted online by the University of Victoria, Canada. By clicking on “View the full map,” you can select the gates, the churches, the playhouses, the markets, and more. Browse the drop down menu on the top right hand side, under “Sites” to find the Northumberland’s House in Aldersgate, the Royal Exchange, and many other Shadow of Night sites. And even better, try to select some of the churches, such as St. James Garlickhythe, All Hallows the Great, and St. Paul’s to see how far they are from the Blackfriars.

As St. Paul’s Cathedral is a major visible landmark in Elizabethan London, and it is fairly close to the Hart & Crown at the Blackfriars, it is also one of the first sites that Diana and Matthew visit right after arriving in London. Although Diana strolls by St. Paul’s Cathedral several times in Shadow of Night, two very significant encounters happen right around St. Paul’s: The accidental first encounter with Jack Blackfriars, and later on with Stephen Proctor.

We were just clearing St. Paul’s Churchyard when Matthew turned on an urchin with a filthy face and painfully thin legs. Chapter 22, SON

The view of St. Paul’s cathedral in Elizabethan London could surprise even historians like Diana. There was no dome back then, and the roof was made out of wood. Diana was also surprised, rightfully so, by the large size of the cathedral, which without modern large office buildings would have looked massive.

This was not Christopher Wren’s graceful white-domed masterpiece, its bulk concealed until the last moment by modern office blocks. Old St. Paul’s, perched on London’s highest hill, was seen all at once. Chapter 15, SON

If you want to see how London looked in Shadow of Night, go to the Visscher’s London Panorama on Wikipedia. The engraving of  London published in 1616 by Claes Visscher (1586-1652) is believed to be a good representation. You can spot St. Paul’s, Baynard’s Castle (to the left), and the Blackfriars (farther to the left).

St. Paul’s windows glimmered in the pale afternoon light. The churchyard around it was a solid mass of people— men, women, children, apprentices, servants, clergymen, soldiers. Those who weren’t shouting were listening to those who were, and everywhere you looked, there was paper. Chapter 16, SON

At St. Paul’s Churchyard you find the stone that marks the spot where Diana hears the sermon. And for a virtual visit, go to the North Carolina State University’s Virtual Paul’s Cross Project website.? While the virtual tour represents Paul’s Cross in 1622, it’s very close to Diana’s Elizabethan London, and it will allow you to visualize what the Churchyard with the surrounding buildings looked like.

Sitting on top of Ludgate Hill, at the highest point in the City of London, today’s Anglican St. Paul’s Cathedral is the seat of the Bishop of London and still one of the most recognizable landmarks. While the original church was founded in the year 604 AD, the current church is designed by Sir Christopher Wren in the English Baroque style. 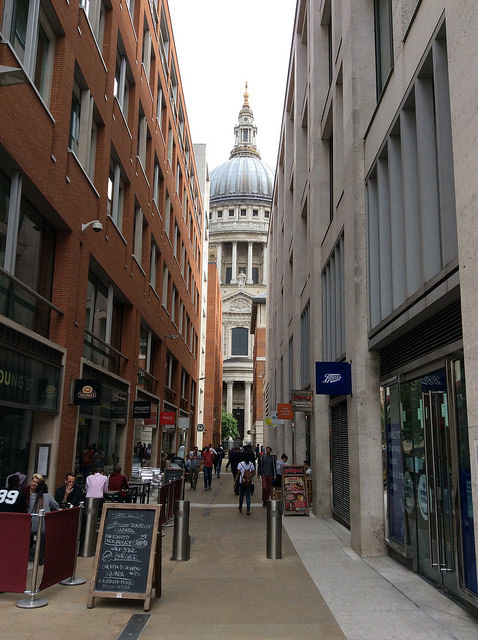 As the largest and one of the busiest churches in London, St Paul’s Cathedral offers up to four services every day in addition to many special events. Checking the website for visiting hours and ticket prices is highly recommended if you plan to enter the Cathedral. There’s no fee to visit St. Paul’s Churchyard.

I felt a surge of energy that reminded me of the temple to the goddess near Sept-Tours. Deep under the cathedral, something sensed my presence. It responded with a whisper, a slight stirring beneath my feet, a sigh of acknowledgment— and then it was gone. There was power here— the kind that was irresistible to witches. Chapter 17, SON