On the Footsteps of Diana & Matthew – Les Revenants

“Dinner is waiting for you at Les Revenants,” she said. “Les Revenants?” It was not a place I’d heard of before. “Philippe built the castle to house Crusaders coming home from the Holy Land,” Matthew explained. “It belongs to Maman.”

Are you planning to visit France any time soon? If you are, you may want to hurry to visit Château de Montbrun, the model for Les Revenants. The current owner is very generous and allows the public to tour the castle. However, Château de Montbrun is for sale, and we don’t know if the future owner will welcome visitors. 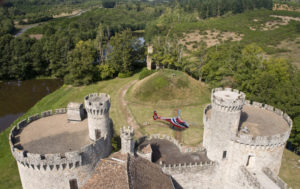 The first castle in stone was built in 1179 by Aymeric Brun, lord of this area. The site is actually a lot older, with the motte right outside the present day castle being the oldest trace of fortifications. With the death of Aymeric Brun, the Bruns divided into several branches who controlled the castellany in co-lordship. They maintained a number of knights who probably established their residences inside the walls of the castle of Montbrun. The ruins of one of the knights’ residences are still visible to the north of the present castle. 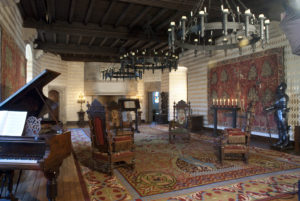 The Bruns’ influence grew over time, particularly by means of important posts in the church, and their name changed to “de Montbrun.”

The castle has a turbulent history and was severely damaged multiple times by wars, revolutions, and fires. According to the records kept at the French Ministry of Culture, the castle was ruined by the English during the reign of Charles VI, and remained dilapidated until 1433, when Pierre de Montbrun, archbishop of Limoges, undertook its reconstruction. During the Revolution, the building was plundered and devastated, then abandoned. In 1871, the castle was rebuilt, but in 1917, an accidental fire devastated the south side of the building. Now beautifully restored, Château de Montbrun retains four large towers, and a “Grand Jacques,” a quadrangular tower and dungeon, considered one of the finest examples of its kind.

The castle is currently privately owned and was classified historical monument by the French Ministry of Culture in 1946. 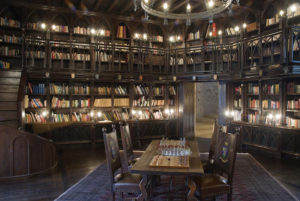 The property is currently for sale for $21 million.

The castle is fully furnished and has been renovated with modern amenities, including,  central floor heating, two elevators, jacuzzi, satellite services, game center, and more! 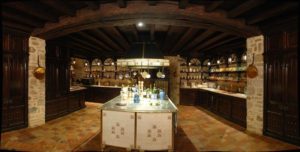 Part of the property are several outbuildings, including a caretaker house, stables, and even a working restaurant with full license.

If you go back to Chapter 32 of The Book Of Life and also refer to the photos in this post by Andreas Caraisco (all photos are posted here with his permission), Deborah’s description of the castle is simply perfect!

Les Revenants was smaller than Sept-Tours, but not by much. There were only four towers, Matthew pointed out, one on each corner of the square keep. 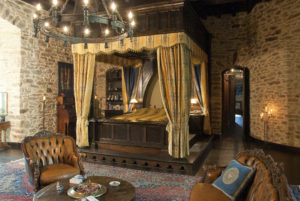 But the moat that surrounded it was large enough to qualify as a lake, and the splendid stable complex and beautiful interior courtyard rather took away from any claims that this was more modest than the official de Clermont residence. Inside, however, there was an intimate feeling to the place, in spite of its large public rooms on the ground floor. Though the castle had been built in the twelfth century, it had been thoroughly renovated and was now fully updated with modern conveniences such as bathrooms, electricity, and even heat in some of the rooms. Despite all that, I was just winding myself up to reject the gift and any idea that we would ever live here when my clever husband showed me the library. 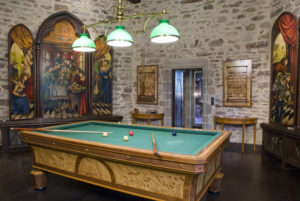 The Gothic Revival room with its beamed ceiling, carved woodwork, large fireplace, and decorative heraldic shields was tucked into the southwest corner of the main building. A large bank of windows overlooked the inner courtyard while another, smaller window framed the Limousin countryside. Bookcases lined the only two straight walls, rising to the ceiling. A curved walnut staircase led up to a gallery that gave access to the higher shelves. It reminded me a bit of Duke Humfrey’s Reading Room, with its dark woodwork and hushed lighting.

Two hours after he’d shown me into the room, I was still there, poking among the boxes while Matthew drank wine and humored me by translating texts when they were in ciphers or a language I didn’t know. Poor Alain and Victoire ended up serving the romantic anniversary dinner they’d prepared for us on the library table rather than down in the dining room. We moved into Les Revenants the next morning, along with the children, and with no further complaints from me about its size, heating bills, or the number of stairs I would be required to climb to take a bath. The last worry was moot in any event, since Philippe had installed a screw-drive elevator in the tall tower after a visit to Russia in 1811. Happily, the elevator had been electrified in 1896 and no longer required the strength of a vampire to turn the crank. (The Book of Life, Ch. 32) 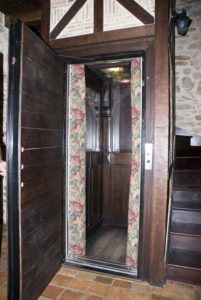 Château de Montbrun is such a gem, we truly hope that Bad Wolf, the production company that is adapting the trilogy for television, will be able to film on location.

When the bells of the nearby churches in Dournazac and Châlus rang to celebrate the birth of a child in long-ago and faraway Bethlehem, Matthew paused to listen to the solemn yet still-exuberant sound. (The Book of Life, Ch. 33)