On the Footsteps of Diana & Matthew – Prague, Malá Strana

Our insatiable wanderlust combined with our love for the All Souls Trilogy has taken us to a truly enchanted city where Gothic, Renaissance, Baroque, and Rococo live side by side in perfect harmony. Welcome to Prague, the city of a hundred spires!

By exploring Diana & Matthew’s Prague, you’ll discover beauty at every turn, especially when you’re committed to walking everywhere looking for doorway signs, sgraffito-decorated buildings, and secret passageways not marked on Google. Those passageways have become an obsession because, let’s face it, “beating Google” can be a lot of fun! Net-net: bring your most comfortable shoes to walk on uneven cobblestones, and a camera (or phone) with extra large storage because you’ll want to take hundreds of pictures.

In part 1, we explore Malá Strana, the neighborhood under Prague Castle. 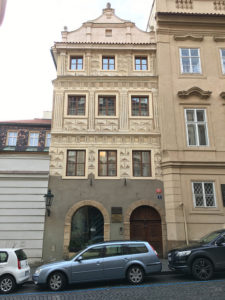 At The Three Ravens

After we’d lived out of saddlebags and a single shared trunk for weeks, our belongings had arrived three days after we did at the tall, narrow house perched on the steep avenue leading to Prague Castle known as Sporrengasse. Our German neighbors presumably dubbed it Spur Street because that was the only way you could persuade a horse to make the climb. —Shadow Of Night, Ch. 27

On a steep, cobbled street, leading to the castle, at 257/3 Nerudova, is the Three Ravens, the four-story house in the Malá Strana district, which has inspired Diana and Matthew’s house in Prague.

Like every other residence on the street, ours had a symbol over the door rather than a house number. After the neighborhood caught fire in the middle of the century, the emperor’s grandfather had insisted on having some way to tell houses apart besides the popular sgraffito decorations scratched into the plaster. —Shadow Of Night, Ch. 27

Frequently referred to as “Lesser Town,” the name Malá Strana literally means “Little Side,” due to its position on the left (west) bank of the river Vltava, a juxtaposition to the larger areas of Prague on the right bank. 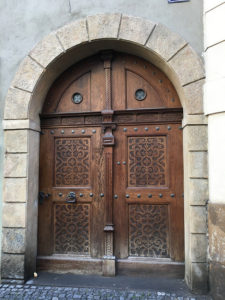 Door of the Three Ravens

Nerudova is named for Jan Neruda, a 19th-century journalist and fiction writer. The street is lined with old buildings with the characteristic doorway signs that once served as street addresses. The surviving signs have been carefully restored and are now protected by law. They represent the family name, the occupation, or hobbies of the people who once inhabited the houses (The Three Ravens doorway sign is fictitious). The doorway sign tradition lasted until the 1770s, when empress Maria Theresa decreed that numbers be used in order to collect taxes more effectively.

According to the website Kràvloskà Cesta, the Three Ravens in Shadow Of Night is actually a late Renaissance building called the Little Horse. However, we couldn’t find any record online other than one website. It’s very possible that the sign was destroyed. In the 18th century, there were about 900 door signs in Prague, and nowadays, only 200 remain.

The back of the building was rebuilt in 1912-13 and today houses the Czech Development Agency, and the Institute of International Relations.

Although the neighborhood is now filled with old noble palaces, housing foreign embassies, you can still have fun searching for the picturesque doorway signs.

For a list of over-the-door signs, go to this fabulous website. Just mouse over on any of the buildings highlighted in dark yellow/light orange to find the doorway sign on the map version. The Three Ravens (aka the Little Horse is the L-shaped building on the map.

[…] we wended our way up Sporrengasse on horseback as befitted a representative of the queen of England, which gave me a chance to fully take in the houses with their canted foundations, colorful sgraffito, and painted signs. We passed the house of the Red Lion, the Golden Star, the Swan, and the Two Suns. At the top of the hill, we took a sharp turn into a neighborhood filled with the mansions of aristocrats and court appointees, called Hradcany. —Shadow Of Night, Ch. 27

The Donkey by the Cradle / Museum of Alchemists and Magicians 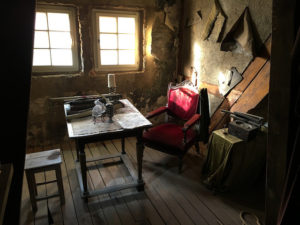 After much espionage and investigation among the Austrian and Italian communities, we discovered that the Kelleys had recently purchased a house around the corner from the Three Ravens in a complex known for its inventive street sign. Someone had taken a few leftover wooden figures from a nativity scene, sawed them in half, and arranged them on a board. They had, in the process, removed the infant Jesus from his crèche and replaced it with the head of Mary’s donkey.
“The Donkey and Cradle meets our needs at present, Master Roydon.” —Shadow Of Night, Ch. 28

Once the residence of the illustrious alchemist (and daemon) Edward Kelley, this building now houses the Museum of Alchemists and Magicians (entrance on the side of the building). While Edward Kelley kept his mysterious laboratory high in the tower, the museum is housed in the basement. Here Kelley conducted his experiments and met with other famous alchemists, including John Dee. Kelley came under the patronage of Emperor Rudolf, but was on and off the emperor’s grace. Made a Knight in 1589 while working on his alchemical experiments to make gold, he was imprisoned by 1591 by the emperor, still with no gold to show. 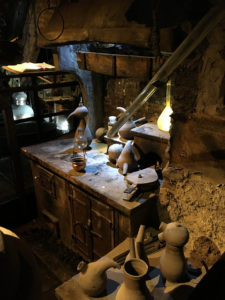 Just around the corner, from a pedestrian side street, at Jánský vršek 8, is the entrance to the Museum of Alchemists and Magicians. The ground floor has a flashy “Universal Studio-style” replica artifacts of the trade and interactive displays representing fantastical scenes of sorcerers.

60+ steps lead to the actual tour where supposedly Kelley performed his alchemy experiments. The tower is a reconstruction of Kelley’s lab, complete with scrolls and grimoires, furnaces, experimental (stuffed) animals, and Kelley’s desk. It may all seem pretty sensational, but it probably fits Kelley’s personality. 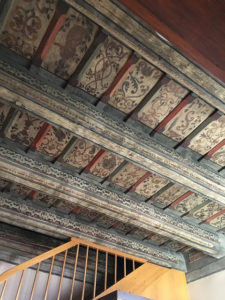 The frescoed ceiling on the 3rd floor of Residence Thunovská

For those who like unusual places to stay, the charming historical Residence Thunovská offers 14 apartments with all the amenities at the footsteps of Prague Castle and one block away from The Three Ravens. You cannot beat this location (despite the absence of an elevator). And the view from the higher floor apartments are spectacular! This Renaissance building has a history and a special connection to the All Souls Trilogy since the Dutch painter Bartholomeus Spranger, a favorite of Emperor Rudolf, used to own the building. He even painted the facade of the house with frescos, which can still be admired today, albeit only in fragments. You can read more about the history of this building on the Residence Thonovská website.

Note: Thunovská is a quiet street as it turns into a staircase leading to the castle.