On the Footsteps of Diana & Matthew – Part 5: Other Oxford Locations

Our journey of the All Souls Trilogy locations in Oxford resumes after the hiatus due to the AllSoulsCon celebration. This time we explore some of the locations where Diana jogs or strolls with Matthew, as well as some landmarks briefly mentioned in A Discovery of Witches that are part of the Oxford charm and we think are worth a visit.

On the Footsteps of Diana & Matthew – Part 5: Other Oxford Locations

“I’ve been a member—once—of Merton, Magdalen, and University colleges. I’ve been a member of New College and Oriel twice each. And this is the first time All Souls has paid any attention to me.” Matthew Clairmont, Chapter 14, ADOW. 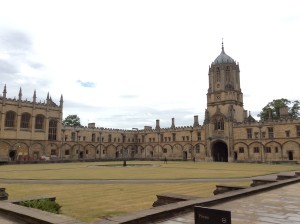 In A Discovery of Witches, several colleges are mentioned. While we don’t cover them in this guide, they are truly beautiful and worth a visit time permitting. If you only have time for one college besides to the obligatory stops at All Souls and New College, we recommend Christ Church. You’ll find some of the colleges mentioned in A Discovery of Witches on the “Other Colleges” photo album on Flickr.

“My familiar route took me past Oriel College and to the tall, black iron gates between Merton and Corpus Christi.” Chapter 7, ADOW

Clairmont rolled along the drive to the gates of Christ Church, where he waited for an opening in the early-morning traffic dominated by delivery trucks, buses, and bicycles.” Chapter 7, ADOW (Note: Christ Church is Phoebe Taylor’s college).

Clairmont steered up the hill and took a right down the High Street. We passed the statue of George II’s wife standing under the cupola at The Queen’s College, then headed toward Oxford’s botanical gardens. Chapter 7, ADOW.

Marcus had even checked Matthew’s favorite Oxford haunt, the Pitt Rivers Museum, where the vampire could often be found dividing his attention between the skeleton of an iguanodon and a likeness of Darwin. Chapter 16, ADOW. 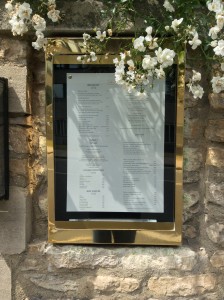 “The chef from the Old Parsonage’s restaurant made it-and provided precise instructions on how not to burn it to a crisp when I reheated it.” Matthew, Chapter 14, ADOW.

It’s the hotel where Matthew procures the memorable dinner he serves to Diana in his rooms at All Souls College (Ch. 14).  At a very short walk from the Ashmolean Museum, this stylish hotel occupies a 17th-century parsonage, and it’s ranked one of the best hotels in Oxford. It’s no surprise, the restaurant is Matthew’s pick.

Sean, who’d shared many a drink with me in the pink-stuccoed pub across the street in our graduate-student days […] Chapter 1, ADOW.

The pink-stuccoed pub mentioned in the very first chapter of A Discovery of Witches is The King’s Arms. We recommend it if you want to experience good, traditional English pub fare. 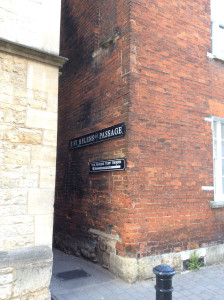 We navigated the uneven sidewalks of Holywell Street, past the entrance to the Turf pub, and through the New College gates. Ch. 14, ADOW.

Tucked in a short, narrow alley nestled against the old city wall, the Turf Tavern feels like finding a treasure. Look for the St. Helen’s Passage under the Bridge of Sights to reach the tavern. And weather permitting, enjoy the outdoor beer garden.

Museum of the History of Science

Adjacent to the Bodleian and the Sheldonian Theatre, the Museum of the History of Science holds a collection of early scientific instruments mostly from Oxford illustrious “celebrities,” including Einstein’s chalkboard featuring his equations from a lecture in Oxford. This is the museum confirming the authenticity of the “re-discovered” telescope built by Thomas Harriot and Nicholas Vallin. 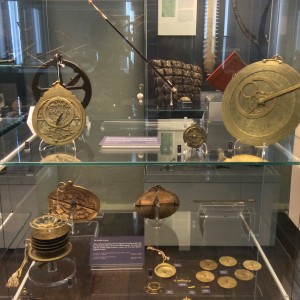 Astrolabes at the Museum of the History of Science

THE WORLD’S leading expert on early scientific instruments at Oxford University’s Museum of the History of Science, Anthony Carter, confirmed today that a refracting telescope bearing the names of Elizabethan mathematician and astronomer Thomas Harriot and Nicholas Vallin, a Huguenot clockmaker who fled France for religious reasons, is indeed genuine. Chapter. 40, SON.

All Souls Trilogy fans will enjoy the collection of astrolabes, which are also detailed in the museum’s online catalogue.

Worth the 127 narrow, twisting stairs of the bell tower, the climb rewards visitors with a stunning view of All Souls College, the Radcliffe Camera, the Bodleian, and other Oxford landmarks. 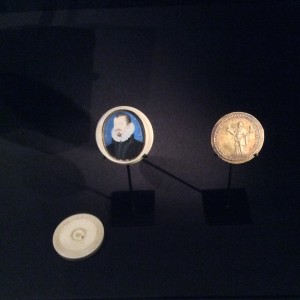 Check the website of the newly reopened Weston Library to find out what exhibit is available.  At the time of our visit, the awe-inspiring Marks of Genius exhibit showcased many All Souls Trilogy-related items, including a portrait of Thomas Bodley by Nicholas Hilliard, works of Shakespeare, Marlow, Vesalius, the Gutenberg Bible, Newton’s Principia, and more.