On the Footsteps of Diana & Matthew – Part 6: The Barbican & Surrounding Areas

There is so much to say about this wonderful city, we didn’t know where to begin. We decided to start with Shadow of Night, focusing on the area around the Barbican since it’s one of Diana’s first “field trips.” From there it’s easy to proceed South towards the Blackfriars. Expect to take a full day, and even two days to visit the Barbican, the Blackfriars and surrounding areas. Comfortable walking shoes are highly recommended as this part of London is best enjoyed on foot. A map of the AST-London is available here.

On the Footsteps of Diana & Matthew – Part 6: The Barbican & Surrounding Areas

While the Blackfriars is primarily in Shadow of Night, The Book of Life takes place in Mayfair, one of the most opulent neighborhoods in London, but there is also a visit to the area around St. James’s Palace, and the modern Blackfriars. Adding a stop at the National Portrait Gallery will allow to see some of the real characters in Shadow of Night.

Note: Most museums in London are free. Take the time to enjoy them! 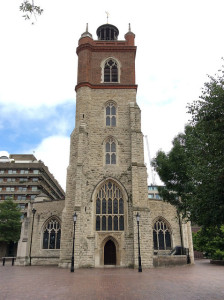 The closer we got to the apothecary’s place of business, the colder the air felt. Just as at St. Paul’s, there was another surge or power […]

In chapter 17, Diana, Pierre, and George Chapman venture outside the Elizabethan’s London city walls to shop at John Chandler’s apothecary in Cripplegate. The area is named after the gate that once was part of the Roman wall. And while this part of the city was almost completely destroyed during World War II, the anglican St. Giles Cripplegate remains standing. The moment Diana approaches this area, she feels some power, which she later learns from Matthew originates from a Jewish cemetery eventually transformed into a graveyard for criminals, traitors, and excommunicates […]

The city walls were just beyond the Percy family house. Built by the Romans to defend Londinium from invaders, they still marked its official boundaries. Once we’d passed through Aldersgate and over a low bridge, there were open fields and houses clustered around churches.[…]

Diana’s Cripplegate is today known as the Barbican, in honor of the Roman gateway that once stood there. Now a modern residential area and center for performing arts, the Barbican Centre hosts music concerts, theater performances, film screenings and arts. You can still see the Roman walls and visit the medieval church of St. Giles Cripplegate.

Pierre’s desire to get me away from St. Giles as quickly as possible and George’s desire for a cup of wine made our return to the Blackfriars far quicker than our journey out.

Note: all the seven gates are mentioned in Shadow of Night: Ludgate, Newgate, Aldersgate, Cripplegate, Moorgate, Bishopsgate, and Aldgate—proof the Deborah won’t miss an opportunity to remind us of the fascinating history of London. ? 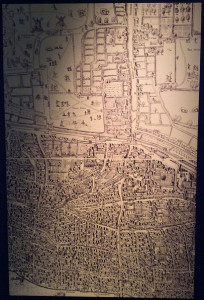 One of the best-kept secrets in this vibrant city, the Museum of London is truly a gem for history lovers who want to understand the fascinating story of Londong from its pre-Roman beginnings to the present. AST fans will enjoy the exhibit about Elizabethan England within the Tudor & Stuart Collection, including the multimedia displays about the Plague and the Great Fire, mentioned in Shadow of Night.

Worthy of note are a London early large scale map, known as the Copperplate Map, and the jugs with the faces, which may or may not be the inspiration for Sophie Norman’s jugs.

The London coven met in a portion of the medieval Greyfriars crypt that had survived a series of disasters over its long history, from the dissolution of the monasteries to the Blitz. Atop the crypt stood Andrew Hubbard’s house: the church’s former bell tower. It was twelve stories tall and had only one room in each of its floors. Chapter 26, TBOL 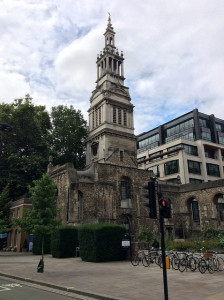 Christchurch Greyfriars is a stone-throw from the Museum of London. We need for fast-forward to The Book of Life to learn that this location is the inspiration for Father Hubbard’s residence in present times, and the medieval crypt is the place where the London coven regularly meets.

“We gather once a month in Father Hubbard’s crypt. He lives in what’s left of the Greyfriars Priory, just over there.” Linda aimed her cigarette at a point north of Playhouse Yard. Chapter 25, TBOL

The Franciscan Church of Greyfriars was established in 1225 and rebuilt in 1704 by Christopher Wren after the destruction caused by the Great Fire of 1666. Sadly, very little remains today of the Wren church as this site was bombed during World War II.  Only the west tower stands, and a rose garden marks the floor plan of the original church. In The Book of Life, we also learn that Christchurch Greyfriars is haunted by the spirits of the royals and courtiers buried there.

“At our Mabon tea this year, Elizabeth Barton said you’re having twins.”

“I am.” Even the ghosts of London knew my business. Chapter 25, TBOL

Photo album: The Barbican and the Blackfriars

For additional visuals, check out the Places in the All Souls Trilogy World by the brilliant daemons at Armitage4Clairmont.