“Spekeing” About The Old Lodge, by Rebecca Wright

Back in February a golden opportunity arose to pay a visit to Speke Hall near Liverpool, aka The Old Lodge. Whilst teenage offspring were carousing around Europe on school trips, we decided to meet up with family in Ormskirk which is very close to Speke. I haven’t visited since reading the All Souls Trilogy so was looking forward to viewing it from Matthew and Diana’s perspective. 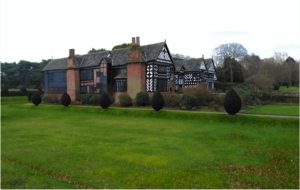 After a pretty reasonable two hour drive down the M62 we approached our destination, which always feel slightly odd as you navigate your way through a fairly industrial area before coming to the much more rural entrance to the Hall itself. I’m constantly curious regarding place names and origins, and subsequent research revealed that Speke is from the old English Spec, meaning brushwood and is recorded as belonging to Uctred a Saxon in 1066. William the Conqueror subsequently gave the manor to one of his favourites, Roger of Poitou, but it’s certainly recorded as being inhabited since the Saxon period – probably longer given its location on the banks of the River Mersey.

After parking the car, entrance is through the Victorian farm complex with the obligatory National Trust café and gift shop, followed by a vast array of entertainment for children (be warned, if you visit with children you may never make it to the Hall) and then through Victorian gardens. Speke sits in a dry moat and entrance is over a small stone bridge, the Hall in its current form dates from 1530, a four story timber framed building with wattle and daub infill. 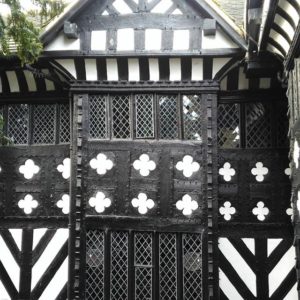 This raised another question – the timberwork at Speke is black. Many fine half – timbered buildings survive across England, but why does the timberwork comes in a vast array of colours? Again subsequent research and asking a Conservation Architect provided a fascinating answer. The timberwork at Speke is painted with tar, many half-timbered buildings in the North West of England are also painted with tar presumably as a weather proofing measure. But this only dates from the Victorian period! During the Tudor period they would have been given an annual lime wash – both the timber and the infill – which would fill in any gaps or cracks, act as an insecticide and also weatherproof the building whilst allowing it to breathe. So during the Elizabethan period the appearance of Speke Hall may have been quite different, the lime wash would have rendered it almost all white in colour. 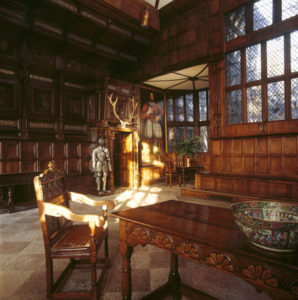 Upon entering the Hall the first area to visit is the beautiful central courtyard, cobbled and with two amazing yew trees – called Adam and Eve and thought to be at least 500 years old – here you can examine the building at close quarters, and just for a moment imagine yourself an Elizabethan taking a breath of air. I could definitely imagine Diana peering up at the surrounding walls whilst Matthew leaned nonchalantly against one of the yews, possibly explaining why he’d allowed a carpenter to go quite so mad with the decorative timberwork, perhaps pointing out the small wooden figures protruding from the second floor and making humorous remarks about who they represent.

Back inside we entered the first room, and here the Elizabethan meanderings cease. I like to see the development of a building, how the inhabitants have made their mark – it is one of the joys of visiting historic houses, the tangible passage of time. In this case one of the later decorative schemes to have survived intact is the Arts & Crafts wallpapers produced by William Morris & Co. I love Arts & Crafts, I love Tudor, I’m not entirely sure I love the two combined. The problem may be that the windows on the first floor are small, the rooms are dark and the paper has aged – so it all looks very murky. Also perhaps the timberwork provides enough decoration, Morris papers are traditionally very detailed so the overall effect is slightly overwhelming. Possibly I had constructed a purist Elizabethan interior in my mind whilst reading A Discovery Of Witches and couldn’t quite match this up with the Morris panorama I was looking at. Whatever the reason I had no sense of Matthew or Diana using these rooms, however all of the rooms are connected by a long corridor running around the inner wall, glazed and with a view into the central courtyard. I half expected to see Kit peering jealously at Matthew and Diana in the courtyard, Gallowglass to come barrelling down one of the staircases perhaps George to wander absentmindedly through one of the many doors. 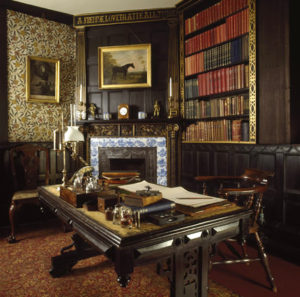 The upper floors and bedrooms are much more in keeping with the Elizabethan period and the beautiful four poster beds are amazing –although the half-term event was Sleeping Beauty so an array of bizarre mannequins lay atop most of them, Matthew would have loved the vast numbers of pint sized princesses avidly looking for clues (and probably provided ALL of the answers to prevent any tears!). You can visit roughly half of the Hall, the other half presumably being given over to office and storage space for the National Trust. Every room has a volunteer guide who will provide you with the history of that particular room and are happy to answer any questions, there are also information cards in each room. One of the most interesting areas upstairs is a priest hole, the partition has been removed and Perspex installed to allow visitors a view inside. The Tudor period was of course a turbulent time for the Church with the Reformation and suppression of the Catholic faith. Speke has an observation hole in a bedroom chimney and an eavesdrop which allows you to listen to conversations at the front door from the second floor, this would hopefully allow enough time to secrete the Priest away into the hidden space off the corridor – all very Matthew! 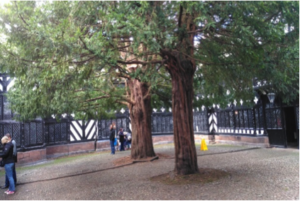 The gardens are well worth a wander and longer walks around the grounds are well sign posted. Here again I could imagine Matthew and Diana wandering among the banks of wild flowers, getting an occasional glimpse of the Hall through the trees. One peculiar feature in the garden is the Bund, a man made mound constructed in 1967.On a clear day it gives a commanding view as far as the mountains of North Wales. The main reason for its construction was to try and shield the house from the adjacent airfield. I mentioned that the approach to Speke Hall was slightly industrial, in 1930 Speke was a village of 400 inhabitants. Between 1930-33 a small airfield was built and by 1960 Speke had a population of 25,000!  The airfield is much expanded and is now Liverpool John Lennon Airport – the Bund is no defence against an Easyjet 747 bound for Spain – you must get a great view of the Hall when taking off though!

If you’re thinking about a visit to Speke Hall I can highly recommend it, definitely added an extra element when I re-read the pertinent chapters. It’s a lovely day out, more so in summer when the gardens are at their best and if you’re staying in the area there is plenty to do and see in Liverpool, the coastline is gorgeous – go Red Squirrel spotting at Formby – and the locals are incredibly helpful and informative.

Nota bene: The photos of the Great Hall and the Library are part of a series of beautiful prints that are available for purchase from the National Trust.