On the Footsteps of Diana & Matthew – Part 1: The Bodleian

The Tenth Knot recently went on a tour of Oxford and London on the footsteps of Diana Bishop and Matthew Clairmont. Our trip was truly memorable so we decided to post a multi-part series about the locations we visited. The Waterstones paperback edition of The Book of Life (published in the UK) already contains a wonderful travel guide written by Deborah Harkness with many All Souls Trilogy locations in England and Scotland. We used Deborah’s guide extensively during our expedition and thought that it would be fun to augment it with photos and a few practicalities we learned along the way. Naturally, we got carried away with the picture taking, and we’re organizing our photos in multiple albums on Flickr. The first album—the Bodleian Library photo album is live. A map is also available here.

Another wonderful resource during our trip was the Places in the All Souls Trilogy World by the witty daemons at Armitage4Clairmont. Thank you daemons!

P.S. We have combined the posts into an easy-to-download PDF document.

The leather-bound volume was nothing remarkable. Chapter 1, ADOW 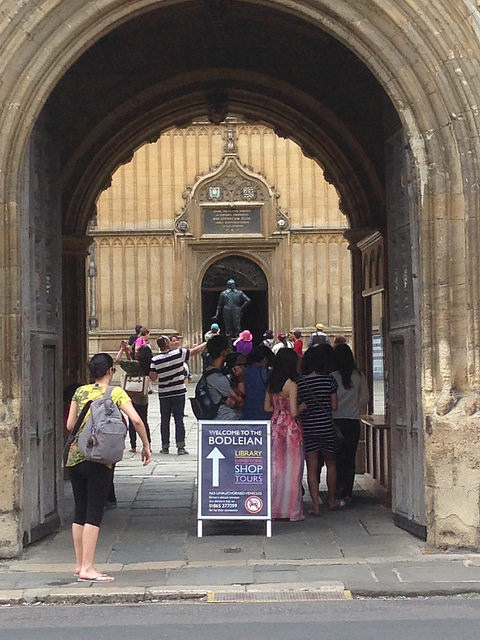 With the very first scene of the All Souls Trilogy set in the Bodleian Library, you get the sense that this location is very significant for the entire series. “The Bod” or Bodley’s Library is one the largest and most famous libraries in the world. The areas open to the public are the quadrangle, the Divinity School, and the medieval Duke Humfrey’s Library. In the quadrangle, you can admire the frilly spires, the big leaded windows, the ancient doors leading to the specific departments, and the statue of William Herbert, Earl of Pembroke. Does this name ring a bell? That’s Mary Sydney’s son!

⚠️ Duke Humfrey’s Library is accessible only by taking a guided tour. Tickets can be purchased at the kiosk in the passage across the courtyard. Just as described in A Discovery of Witches, there’s a protocol to enter Duke Humfrey’s.

I deposited my bag in the cubbyholes by the door after first removing my wallet, computer, and notes, and then I headed up to the twisting wooden stars to the third floor. Chapter 4, ADOW.

Visitors, just like scholars, must check in their bags in a locker—a big chest is used for groups during the guided tours, and small lockers are provided for scholars and individual visitors. Cue the fangirl moment!

To the chagrin of the All Souls Trilogy fans, it is only possible to visit the Arts End. Alas, the Selden End, the section where Diana and Matthew meet, is not open to the public as the noise from visiting crowds would be disruptive for the scholars.

[…] I said, already moving in the direction of the Selden End, the airy seventeenth-century addition that ran perpendicular to the main axis of Duke Humfrey’s. Chapter 1, ADOW.

Unless you’re a scholar, you can admire the Selden End on books and/or stock photography. We found a nice photo album on this Oxford University page. ⚠️ Photography is not not allowed inside Duke Humfrey’s, so we couldn’t take any photos.

The adjacent round Radcliffe Camera was originally built as a medical library. However, today it’s used as a reading room and is part of the gigantic Bodleian Library complex that runs through tunnels underneath the Radliffe Camera.

? Not-to-be missed: The small Bodleian Library gift shop, a book lover’s heaven, where you can admire many Bodleian Library-inspired items, including the tote bag with the Bodleian Oath that Diana “purchases” for 20 pounds during one of her visits.

I had taken it from the library shop when we retrieved the Book of Life, making sure to leave a twenty-pound note under the pencil cup near the till. Fittingly, the canvas bag had the library oath emblazoned upon it in red and black letters. Chapter 37, TBOL.

Factoid: Duke Humfrey’s was the location of the Hogwarts Library restricted section in Harry Potter and the Sorcerer Stone. The flame in Harry’s lantern was computer generated as fire is absolutely forbidden in the Bodleian Library.